ICHR is completely outraged by the execution of another young protester asking for basic human rights, and while absolutely condemning the intentional murder of Majid Reza, by the criminal regime of Islamic Republic for the suppression of the people to stay in power, we strongly call on United Nations to hold the terrorist regime accountable for its crimes against humanity and take all the leaders to the International Criminal Court and the United Nations Security Council to prosecute. 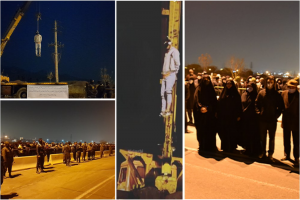 On Monday, December 12, Majidreza Rahnavard was executed publicly in Mashhad. He is another one of those who was arrested during the nationwide protests.  After numerous tortures, he was forced to confess and was hanged (murder) under false accusations in the corrupt judicial system by the criminal and terrorist regime of the Islamic Republic. This is the second execution of protesters within a week.

ICHR loudly calls for accountability and Justice, the criminal regime and the Supreme Leader of the Islamic Republic (Ali Khamenei) must answer for their continued crimes against humanity and their terrorist activities. Murdering protesters through execution demands an immediate accountability and prosecution of the regime officials.

The actions that governments worldwide must be taken are: