ICHR is extremely sad and horrified by the death of Mahsa Amini who was arrested and tortured to death by the agents of The government of Iran for her opposition to forced Islamic dress – Hijab – and condemns the brutality of the regime in killing her and innocent people.

“The Islamic Republic of Iran is the only one responsible for the death of Mahsa Amini and must be held to account for this criminal act of torture and killing”. Said Ardeshir Zarezadeh, ICHR director.

Mahsa Amini a 22 years old daughter of the grieving parents whom were site seen in Teheran, died after she was arrested and beaten so savagely to coma for her opposition to forced hijab.

It has been confirmed that when the gasht ershad ( anti-human government’s police ) arrested Mahsa for allegedly not having proper hijab, she was taken to detention then tortured and beaten her so severely till she developed brain bleed and went to a coma which led to her death. 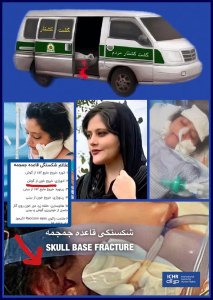 The Iranian official have continuously violated International laws and countless women have been harassed, beaten, detained and killed in Iran since the revolution of 1979 for allegedly defining the states forced hijab law.

The international human right laws require governments to ensure that the people are able to carry out their day to day life in safety and without threats to their life, persecution, and harassment.

Th regime of islamic republic’s most recent crime against humanity is being responsible for killing mahsa after savagely torturing her to come in detention that let to her death, and they must be held accountable.

ICHR strongly condemns the harassment, persecution and arrest of women in Iran for their Hijab, as all women must be free to choose their own clothing. We also urge the international community to take serious actions to stop the regime in Iran from killing innocent people.