ICHR is horrified by the passing of Behnam Mahjoubi who was in jail for attending a peaceful protests that took place in February 2018 by Gonabadi Dervishes in Tehran, which were violently quashed by security forces and resulted in the arrest of hundreds of protesters.

The Islamic Republic must be condemned in the international criminal court of Justice for the torture, halt of medical treatment, and Behnam’s death. The regime continues to torture prisoners to make them suffer.

“Behnam Mahjoubi, a detained Gonabadi Dervish, passed away this morning four days after being given an excessive amount of unknown medication in prison.”his friend tweeted today.

“Credible sources from among hospital authorities have informed us that Behnman Mahjoubi has passed away but (the doctors said) they have ordered us to keep him connected to the machines for three days to keep up appearances,” Said; Ibrahim Allahbakshi, his friend and a member of persecuted Gonabadi Dervish religious minority.

Last night, doctors had told his family that he was only breathing with the machines.

“Hospital staff have done their best and it would take a miracle to get Behnam back,” Added; Behnam Allahbakshi

In September 2020, the prison clinic’s doctor pressured him to take sleeping tablets apparently to control his panic disorder, after which he suffered seizures and partial paralysis. Since then, his health has seriously declined.

A source close to the family said that Behnam Mahjoubi previously was taken to the prison infirmary on Friday night and was given “sleeping pills” because there was no doctor on shift. His health deteriorated after taking the pills and he went into a coma.

His mother Batoul Hosseini said from outside Loghman Hospital that she was not allowed to see her son. 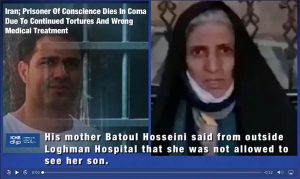 Behnam has sent a voice message before hospitalization and confirmed that he was tortured in jail. He exposed the prison condition stating that it’s overcrowded and unhealthy.

ICHR Strongly condemns the Government Islamic Republic of Iran for crimes against the political prisoners including killing prisoners either by Death Penalty, Medical Negligence, and Torture. They must be prosecuted in the International criminal court of Justice.

Behnam Mahjoubi, from Iran’s persecuted Gonabadi Dervish religious minority, is being subjected to torture and other ill-treatment, including through the denial of specialist medical care. He is a prisoner of conscience serving a two-year prison sentence in Tehran’s Evin prison for attending a peaceful protest.

Mahjoubi was arrested in April 2018 in connection with peaceful protests that took place in February 2018 by Gonabadi Dervishes in Tehran, which were violently quashed by security forces and resulted in the arrest of hundreds of men and women.

Amnesty International wrote in December 2020 that Behnam “suffered from a serious panic disorder for which he needs daily medication prescribed by a doctor outside prison.” 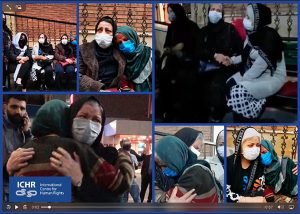 These mothers are all grieving because the Islamic republic government has one way or another killed their loved ones and has left them with unbearable pain. All because their loved ones were opposing the state of their human rights violations such as use of fire arms on protesters, shooting down the Ukrainian plain, death sentences, torture, abduction, hostage taking, child marriages, labour thefts, discrimination against minorities women, teachers, religious groups, and the list continues.