The International Center for Human Rights, December 23, 2020 – Toronto, Canada:  ICHR is pleased to announce that the Islamic Republic of Iran, Supreme Leader and all the defendants whose names are listed in the Doe v Iran lawsuit on behalf of the three families of the victims of downedPS752, have been noted in default with the Ontario Superior Court of Justice at Toronto by senior lawyer Mark Arnold on December 23, 2020.

The default judgment that Mark H. Arnold, LL.M., Certified Specialist (Civil Litigation) has put in his request for a court date to assess the damages for a judgement at the Ontario Superior Court of Justice is taking the families of the victims one step closer to find justice.

Mr. Arnold states that by noting in default, all the defendants, including the Supreme Leader of Iran, are now deemed to admit the truth of all statements set out in the statement of claim with the Ontario Superior Court of Justice.

“After almost one year of delaying Justice, the lack of disclosing the contents of the black box, the continued tactical actions by the regime to hide their crime in the matter, and the games, excuses and empty promises, the default judgement will be a great step to Justice for families of the victims of PS 752.” Said; Ardeshir Zarezadeh, Executive Director of ICHR Canada.

ICHR continuously fights for families’ rights in pursuit of justice, and acts as an advocate and consultant for the families.

On January 08, 2020, Iranian regime’s IRGC launched two missiles and shot down the Ukrainian jetliner PS752 which killed all 176 passengers on board.

This terrorist act of IRGC is unacceptable and we will fight to the end.” Added; Ardeshir Zarezadeh.

ICHR strongly stands in Solidarity with the families of the victims in pursuit of justice and urges the government of Canada to support the families in the Ontario court of justice, and further take the claim to the international court. 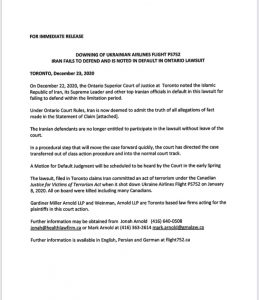 The press release by Mark Arnold