ICHR – TORONTO, 25 March 2020:  Today, Mr. Mahdi al-Mashat, the President of the Supreme Political Council in Sana’a ordered the release of all Baha’i prisoners in a TV announcement. This order includes a pardon for Mr. Hamed Bin Haydara, an imprisoned Baha’i, whose death sentence was upheld at an appeal court in Sana’a just three days ago.

We, at ICHR, are happy to learn about this order and welcome the release of the Bahais from Yemen prisons. Those Bahais have been jailed wrongfully on their religious beliefs.” Said Ardeshir Zarezadeh, ICHR director. “The order must be implemented as soon as reasonably possible.” 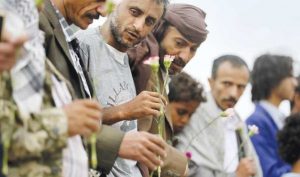 Members of the Baha’i faith protest outside a state security court during a hearing in the case of Hamed bin Haydara, in April 2016. Bin Haydara is one of many Baha’i detained by the Houthi militia since the start of the civil war. In January 2018 he was sentenced in absentia to death, accused of apostasy and espionage. (AP)

Mr. Haydara is one of six Baha’is currently imprisoned in Sana’a for their beliefs. Mr. Waleed Ayyash, Mr. Akram Ayyash, Mr. KayvanGhaderi, Mr. Badiullah Sanai, and Mr. Wael al-Arieghie are still in prison and must be freed immediately.