ICHRCANADA strongly Calls on Hisham Al Alawi, ambassador of Iraq in The Hague, for immediate withdrawn of Khaled Shamo Sarhan’s death sentence, and fair trial with due process. As he is not Guilty of the charges against him.

Khaled Shamo Sarhan has been imprisoned since October 2017 under false charges. Khaled didn’t know why he was imprisoned. His mother told him when she visited him after one month in prison, that he was suspected of murder.

Deputies from Canadian Parliament have send a signed letter to the Iraqi ambassador in Canada to support the case of young Yazidi Khaled Shamo.

Sarhan is accused of killing Faris Mohammed on August,3,2017 ,at the Iraqi-Syrian border

While Mohammed and his accomplice were smuggling Daesh fighters from Syria into Iraq.

According to the information available , we are given to understand that this is fallacies accusation , as he was more than three hundred kilometres away from the border at his Qaida IDP camp on the same day

The day of Mohammed’s death ,August,3,2017 , marked the third anniversary of the Yazidi Genocide and on this day Sarhan evidently participated in a commemoration in his IDP Camp where he was photographed and filmed speaking out against the Iraqi government. In court , a judge with alleged Al-Qaeda and Daesh connections ignored the film and photograph evidence of Sarhan at the genocide commemoration, as well as more than seventy eye-witness testimonies, and sentenced him to prison.

Judge Jamal Qaro seemingly overlooked evidence that demonstrates his innocence but believed the testimony of Khuther Hussein, Mohammed’s accomplice in smuggling ISIS fighters to Iraq on the day of the killing.

In the event the facts are as the have been relayed to us, his imprisonment and death sentence are based on false allegations and are a clear form of minority persecution against the Yazidi people.

We would therefore request that you convey to the government of the Republic of Iraq our strong desire to see Mr.Sarhan’s death sentence withdrawn and an assurance that he receive a new and fair trial with due process . 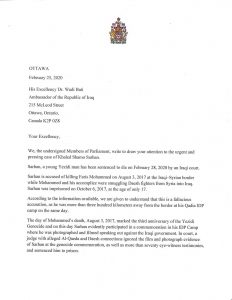 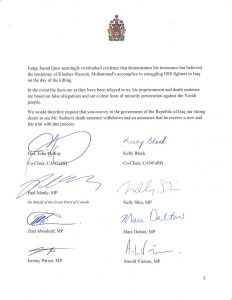 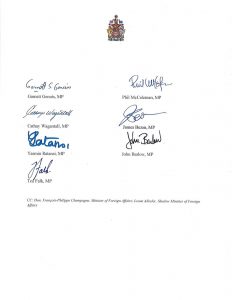 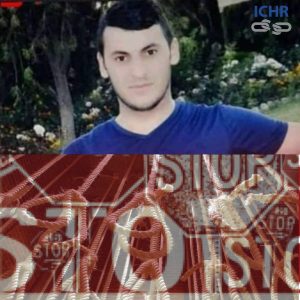 In August 2014, at the age of 15 years, he fled together with his family from Shingal (Sinjar), when they were attacked by IS. Since then he lived in an IDP camp in Kurdistan.

The reason Khaled is imprisoned is that he is suspected of murder on Faris Nawaf Mohamed. On 3th of August 2017 Faris was travelling with Khadr Aziz Mohamed, both Arabic men, from Iraq to Syria. Next to the Syrian border, near Khanasor, an incident happened.

Faris was shot and killed and Khadr was injured. Khadr said that the attack was a robbery attack. Khadr didn’t know the person who attacked him, but later on his community came up to suspect a person with the name Khaled Shamo Alqerany.

On 8th of October 2017 Kurdish police arrested Khaled Shamo Sarhan in camp Qadia, more than 200 km  from the place where Faris was killed. Also his name is not the same, but still they arrested him.

On 3th of August 2017 there was a memorial in camp Qadia about the genocide that happened in 2014 in Shingal (Sinjar). Khaled was present there, and many of his friends can confess this. Also the police in that camp confess that. Khaled also not meet other descriptions of the suspect.

The presumption is that the two Arabic men were not attacked but were helping to smuggle IS fighters to leave Iraq to go to Syria. Many of the relatives of these men belong to IS.

For 2 years and 4 months Khaled is imprisoned now and during this time he has been tortured a lot and for seven months his family was denied to visit him.

He has been brought to court and investigation office for twenty times. Every time he has been send to court, they suspended because of lack of proof and the judges decided that there was not enough information to start the lawsuit. Still they tortured Khaled to get a confession but still he has not confessed any of the charges of murder.

On the 4th of February 2020 Khaled was brought to court in Tel Kaif. The judges decided to give Khaled a death penalty by hanging him. The death penalty is allowed to be carried out after 30 days on the 5th of March 2020. The judge who ruled this lawsuit was also judge under the IS occupation and cooperated with them. More than hundred of his relatives belonged to IS. Probably the judge is biased by IS ideology.

By Iraqi law you can only charge death penalty if the age of the suspected during the act of crime was 20 years or above. Khaled who is suspected of this murder, was only 17 years old in the time Faris was killed.

ICHRCANADA Calls on for the immediate release of Khaled Shamo Sarban. Pending his release Khaled must have access to his lawyers and family and that he is protected from torture and other ill-treatment.