On December 8th,2019, Anniversary of Universal Human Rights Day, The International Center for Human Rights in Toronto-Canada (ICHR) commemorated another year of fighting for humanity and democracy by announcing it’s Annual Award, in recognition of an individual’s outstanding contributions and dedications to the advancement of human rights. The award was presented by Dr. Reza Moridi, and Ardeshire Zarezadeh, at the ICHR’s Award Dinner held at the Paradise Banquet Hall. 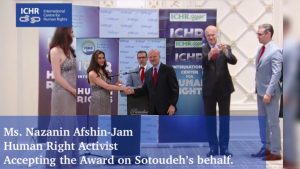 And Nasrin’s message was presented by her spouse, Mr. Khandan via video.

Nasrin Sotoudeh has represented prisoners of conscience, opposition activists, and political prisoners, as well as the women imprisoned for opposing forced hijab. She has also strongly stoop up against death penalty for juveniles.

The ICHR Annual Prestigious Human Rights Award is an honorary award given to the individuals and organizations in recognition of their contributions and dedications to the advancement of human rights.

It provides an opportunity to give public recognition to the achievements of the recipients themselves and to send a clear message to human rights defenders all over the world that we are grateful, and supports, their efforts to promote all human rights for all.

The event also addresses the massive and systematic human rights violations in the Middle East and highlight the services that ICHR provides to people in Middle East.

The International Center for Human Rights (ICHR) is a non-governmental, non-profit international organization dedicated to promoting and defending human rights and democratic values. Our goal is to secure a peaceful and equitable life for members of the society.

Our group includes a large number of human rights activists, many with over ten years experiences whom have come together to establish ICHR in order to campaign against massive and systematic human rights violation in Iran and its neighbouring countries.

We strive to educate, raise awareness , and gain international support for people suffering from inhuman and unjust treatment by the corrupt governments and dictatorships.

We believe in every individual’s rights, as enshrined in the Universal Declaration of Human Rights and other international standards.

We cannot fight this battle alone and in order to continue, we are in constant need of your support. We invite you to become a member and join us in our mission. Financial support is greatly appreciated as well.

Nasrin Sotoudeh is a prominent human rights lawyer and activist in Iran. She has represented imprisoned Iranian opposition activists, political prisoners following the disputed June 2009 Iranian presidential elections, and the prisoners of consciousness as well as prisoners sentenced to death for crimes committed when they were minors.

Her clients have included journalist Isa Saharkhiz, Nobel Peace Prize laureate Shirin Ebadi, and Heshmat Tabarzadi, the head of the banned opposition group National Democratic Front. She has also represented the women arrested for appearing in public without a veil,  to protest forced hijab. which is a punishable offence in Iran.

Sotoudeh was arrested in September 2010 on charges of spreading propaganda and conspiring to harm state security, and was imprisoned in solitary confinement in Evin Prison. In January 2011, Iranian authorities sentenced Sotoudeh to 11 years in prison, in addition to barring her from practising law and from leaving the country for 20 years. Later that year, an appeals court reduced her sentence to six years and her practice ban to ten years.

In June 2018 she was again arrested, and on 12 March 2019 sentenced to jail in Tehran, after being charged with several national security-related offences. While a Tehran judge told the Islamic Republic News Agency she was imprisoned for seven years, it was reported by other sources that the maximum sentence included 10 years in prison and 148 lashes, along with six other verdicts and sentences totalling 38 years bundled together.

Nasrin Sotoudeh has always stand up human rights and dedicated her time and life to defending people’s rights.

She is one of the last remaining courageous human rights lawyers who has accepted all risks for defending the victims of human rights violations in Iran.

Sotoudeh’s imprisonment was widely condemned in the international community. As millions of people around the world has come together including Human right defenders and organizations to call on the government of Iran to release her immediately and unconditionally.

ICHR condemned what it called the “unjust and harsh verdict” against Sotoudeh, and called her “a strong voice for rule of law and justice in Iran”.

Ardeshire Zarezadeh, Executive Director for Iran, and The Middle East at ICHR Canada. said: “Imprisoning a human rights defender for her peaceful activities is an obvious fact that the judge in Nasrin Sotoudeh’s case has ensured that she stays locked up for more than is required under Iranian law compounds, that makes the outrageous injustice of her sentence yet another strategic violation of human rights by the government of Iran”.

If you are interested for more information on Sponsorship opportunities with ICHR Toronto-Canada, please Contact: Mr. Cyrus at info@humanrightsintl.com, or call 888-908-7317. 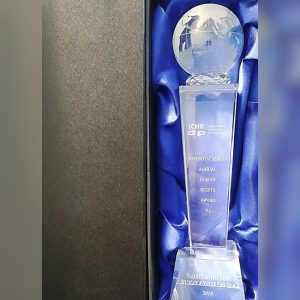