US & UK Should Acknowledge What is Happening in Yemen

US & UK Should Acknowledge What is Happening in Yemen

ICHR Calls on US and UK to acknowledge that landmines aren’t just killing those who step on them, countless Yemenis are afraid to farm and harvest vegetables, wheat, and other crops, knowing they risk stepping on a landmine, and the mines are preventing Yemenis from accessing water wells and aid workers from reaching communities that are in desperate need.

Saudi-led coalition, which the UK & US backs. Through Indiscriminate coalition airstrikes that have taken a devastating toll on markets, homes, and hospitals, killing and wounding thousands of civilians. Many of the coalition attacks may amount to war crimes.

Landmines laid in farmlands, villages, wells, and roads have killed at least 140 civilians, including 19 children, in the Hodeida and Taizz governorates since 2018, according to the Civilian Impact Monitoring Project, a humanitarian data source. 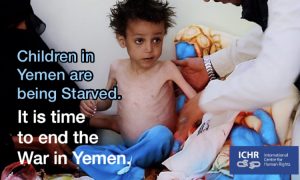 “Houthi-laid landmines have killed and maimed numerously civilians, but that’s not all they have also prevented vulnerable Yemenis from harvesting crops and drawing clean water desperately needed for survival, and as a result of that the children are suffering the most” Said Ardeshir Zarezadeh, Executive Director for Iran, and The Middle East at ICHR Canada.

Landmines have also left at least three western coast water facilities inaccessible, two aid groups said. In addition, mines have made it more difficult for villagers to feed themselves and maintain their income. Five people said that they had been injured or that relatives had been killed when landmines detonated in farmlands or grazing lands; many displaced people said mines prevented safe harvesting and killed valuable livestock.

Yemen’s war, fought between the Saudi Arabia-led coalition and Yemen’s Houthi forces, has repeatedly decried the humanitarian crisis, nearly 10 million Yemenis are one step away from famine. Immediate political solution is much needed to end this war.

“The surge in the destruction of infrastructure and the healthcare system’s near-collapse which has claimed more lives, has set back the development by nearly a generation. Even if the war ended tomorrow there is still a lot of work that needs to be done” Said Ardeshir Zarezadeh, Executive Director for Iran, and The Middle East at ICHR Canada.

HRW has reported that for four years they have investigated potential war crimes by all sides in Yemen. And visited bombing sites, interviewed victims, family members, and witnesses.

They also have examined the rubble of countless civilian structures, where HRW have uncovered evidence of weapons fragments, which their experts have analyzed.

Some of those twisted metal fragments were found to have been made by a UK company and sold with the British government’s approval.

ICHR Calls on US and UK to acknowledge that landmines aren’t just killing those who step on them, and they should not ignore the ongoing crisis and deaths. It’s Critical that UK ends their arms sales, and to be held accountable. As well as justice for the victims and their families.