ICHR strongly calls on Saudi Arabia to stop violating the rights of the women in the country, and to start abiding by the UN laws and laws of human rights. They must immediately and unconditionally free all the women activist, and protesters in prison. As well as The authorities must be held accountable for their crimes against human rights and women’s rights.

Under the male guardianship system, a man controls a Saudi woman’s life from her birth until her death. Every Saudi woman must have a male guardian, normally a father or husband, but in some cases a brother or even a son, who has the power to make a range of critical decisions on her behalf. The Saudi state essentially treats women as permanent legal minors. Saudi Arabia has done very little to end the system, which remains the most significant impediment to women’s rights in the country.

While other countries in the Middle East have elements of the male guardianship system, Saudi Arabia’s is the by far the most draconian in the extent of its laws and regulations, as well as the authorities’ efforts to apply them. Human Rights.

No Freedom to Travel or Get a Passport

Women cannot apply for a passport or travel outside the country without their male guardian’s approval, restrictions the Interior Ministry imposes and enforces. In practice, some women are prevented from leaving their homes without their guardian’s permission and guardians can seek a court order for a woman to return to the family home. The travel restrictions make it very difficult for Saudi women to flee the country. Many resort to hacking into their male guardian’s phone to change their travel permission settings or run away from family members while outside the country.

No Freedom to Choose Marriage Partner, and Child Marriages

Saudi authorities limit a woman’s ability to enter freely into marriage by requiring her to obtain the permission of male guardian. A woman’s consent is generally given orally before a religious official officiating for the marriage, and both the woman and her male guardian are required to sign the marriage contract. Whereas men can marry up to four wives at a time. Saudi law has no minimum marriage age, girls as young as 8. On January 9, 2019.

As in other countries, many women in Saudi Arabia are subject to domestic violence. Over a one-year period ending October 13, 2015, the Ministry of Labor and Social Development reported that it encountered 8,016 case of physical and psychological abuse, most involving violence between spouses. Saudi Arabia criminalized domestic violence in 2013.

Women who attempt to flee an abusive spouse or family can be arrested and returned to their families. If they flee or are referred to shelters, they are not allowed to leave unless they reconcile with family members or accept an arranged marriage. The shelters and the authorities do not facilitate women’s ability to live independently.

Saudi Arabia has increased employment opportunities for women in recent years in areas previously closed to them. The Saudi government does not enforce formal guardianship restrictions on women wishing to work, but the authorities don’t take action to stop when private or public employers whom require a guardian’s consent for women to work or restrict jobs to men. In addition, there are still some professions, like judges and drivers, remain off limits to women.

A 2014 medical code of ethics prepared by the state institution declares that a woman’s consent should be sufficient to receive health care. In reality, however, the requirement for guardian permission is dependent on a particular hospital’s internal regulations, and the government does not do anything about it.

Women’s right to divorce is more restricted than for men. Men may unilaterally divorce their wives without condition. The man does not need to inform his wife that he intends to divorce her, nor must she be in court for her husband to obtain a divorce decree. The women have no right to unilateral divorce and are subject to lengthier and more costly processes.

While the courts may allow children to live with their mothers following a divorce, women have no right to be their children’s legal guardian.

In the matters of inheritance, as in most Muslim-majority countries, women are only entitled to inherit half of what male inherit.

“It is very difficult to transfer guardianship except for cases in which a woman can prove severe abuse or that the guardian is incapable of caring for her, for example due to old age. Even then, it can only be done through a court order and can be difficult to establish the requisite level of proof.” According to HRW reports.

Restrictions on Leaving Prison and Shelters

Saudi prisons and juvenile detention centers only allow woman to exit into the care of a male relative. Imprisoned women whose families refuse to release them are forced to remain in prison or in shelters until they reconcile with their families or obtain a new guardian, occasionally only after arranged marriages.

Under Crown Prince Mohammad bin Salman, Saudi authorities have intensified a coordinated crackdown on dissidents, human rights activists, and independent clerics. In 2018, this repression extended to the country’s leading women’s rights advocates who have advocated ending the male guardianship system. On May 15, just weeks before the Saudi authorities lifted the ban on women driving on June 24, authorities began arrests of prominent women’s rights activists and accused several of them of crimes like treason that appear to be directly related to their activism.

“The women are subjected to ill-treatments, torture, whipping, and sexual assault in prison.” According to HRW reports. 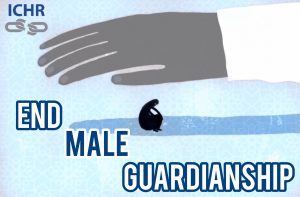 ICHR strongly calls on Saudi Arabia to stop violating the rights of the women in the country, and to start abiding by the laws and laws of human rights. They must immediately and unconditionally free all the women activist, and protesters in prison. The authorities must be held accountable for their crimes against human rights and women’s rights.